Home News We May Be Severely Underestimating the Number of Car Fatalities Caused by Cell Phones
By: Paris Martineau, Source: NYmag.com, Originally Published: 10.17.17

It’s a pretty self-evident fact that cell-phone use makes you a crappy driver. But the consequences of that crappy driving are still murky: According to a recent report by Bloomberg, what we think we know about our cell-phone usage behind the wheel is wildly inaccurate, and that’s a serious problem.

The National Highway Transportation Safety Administration keeps a running tally of all of the vehicular-related fatalities that occur each year in the U.S., and it’s from that information that lawmakers, journalists, and activists decide where to focus their energies. Bloomberg’s report found that the NHTSA’s data set is severely underreporting one major cause of road fatalities: cell-phone usage.

Recent NHTSA reports show that over the last few years, road fatalities have increased by a whopping 14.4 percent after being more or less in decline for the last decade. Bloomberg points out that none of the normal causes seem to attribute for this crazy spike: Speeding- or drinking-related incidents haven’t increased drastically, nor are Americans driving significantly more miles than they used to. But you know what has increased (and drastically) over the last few years? Cell-phone use. 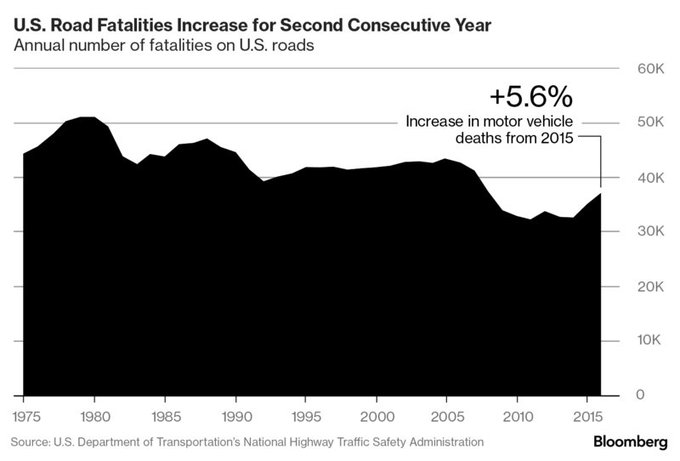 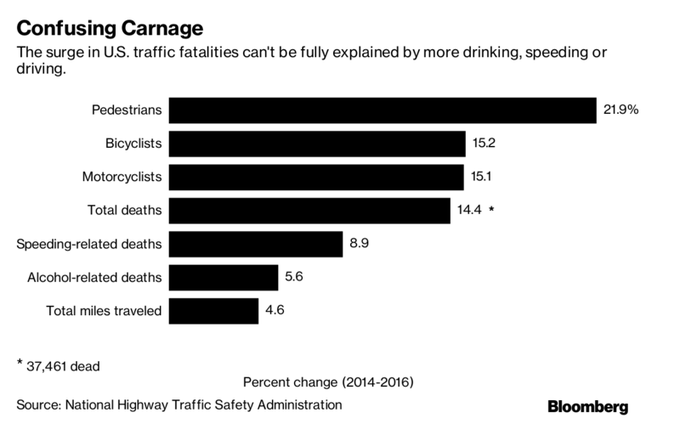 The article cites a study of 3 million people by the nonprofit National Safety Council, which found that the average driver uses their phone during 88 percent of trips, yet the NHTSA reported that only 448 phone-related accidents occurred in all of 2015. This isn’t a miracle. People haven’t suddenly become experts at texting and driving. This is a prime example of how routine data collection can go awry and have serious real-world consequences.

The NHTSA collects its data on fatalities from individual states, which in turn, collect their data from a variety of local and regional sources, who all draw their information from police reports, which can vary wildly station by station. This utter lack of standardization can lead to wildly inaccurate results. According to Bloomberg, “Only 11 states use reporting forms that contain a field for police to tick-off mobile-phone distraction, while 27 have a space to note distraction in general as a potential cause of the accident.” Add the fact that mobile-phone use isn’t something that officers (or in the worst case, first responders) can physically test for at the scene, like intoxication, and you begin to get an idea of just how much we’re missing.

The problem is, if we don’t know how often something like this happens, we will never raise the funds (or constituent demand) needed to fix it. Smartphones are an ever-present part of our reality, that’s a fact that no one is trying to deny or change. But if we’re going to keep inventing new ways to distract ourselves (and vehemently deny the total superiority of self-driving cars), we need to find a way to — at the very least — get a basic understanding of how all of this tech impacts us behind the wheel.