“We’re now on track for elder abuse to triple in the decade between 2020 and 2030,” Lead Program Coordinator for the Elder Justice Project Jacqueline Pontello said. Pontello said signs of elderly abuse include frequent injuries, unexplained bruising, loved ones seeming depressed, confused, even isolated or they’re in fear.

However, elder abuse is underdiagnosed.  The website AuntMinne had an interesting article on the importance of x-rays in proving abuse. Radiologists may identify elder abuse in emergency departments based on “mechanism mismatch.”

“The radiographic finding of a ‘mechanism mismatch,’ that is, an injury or fracture pattern inconsistent with the mechanism being described by the patient or their caregivers, is a critical finding that should trigger concern.”

The extent of injury must consistent with the reported mechanism. Researchers at Weill Cornell Medicine reviewed medical literature. Evidence suggests victims are most likely to sustain radiographically visible injuries to the face, upper extremities, and head.

The second major cause is assault causing injuries to upper extremities. The victim may attempt to brace or defend themselves. This is less obvious and harder to prove. The nursing home will blame it on a “unwitnessed fall” instead of a push. Additional training would help emergency room radiologists recognize when to ask more questions about the cause of the injuries.

“In addition, wrist and forearm fractures are particularly common, such as the classic Colles fracture. “Nightstick” fractures may also occur when a victim pronates and flexes at the elbow to block an overhead blow, exposing the ulna to direct impact.” 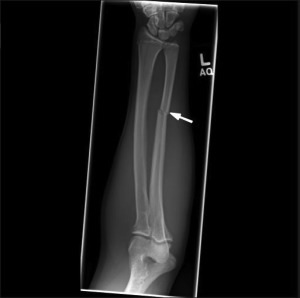 A radiograph of the left forearm demonstrates a displaced fracture of the ulnar diaphysis (white arrow), a “nightstick fracture.” Image courtesy of Radiologic Clinics of North America.
The cover-up or failure to investigate is against the law. Be vigilant. Ask questions. Pay close attention to the staffing, smells and condition of other residents.
Video surveillance or witnesses often prove the truth.   The safety of vulnerable adults are at stake. We must protect the safety, health, and well-being of vulnerable adults.