E Jean Carroll is a writer who accuses Donald Trump of rape and defamation. Carroll says Trump raped her. Trump denies it because she is not his “type” and he claims is unattractive. However, the 76 year old twice impeached disgraced former President ruined his own obnoxious defenses in his recent deposition.

After claiming that she was not his “type” therefore he would not want to sexually assault her, he then mistook for his ex-wife Marla Maples during a deposition.

The photograph showed Trump in Carroll’s company in the 1990s. Trump was married to Maples at the time of the assault. Then he basically admitted to the assault by testifying that E Jean Carroll was ‘nut job’ who enjoyed being sexually assaulted.

Multiple media reports show that Trump is losing it. Tragic. 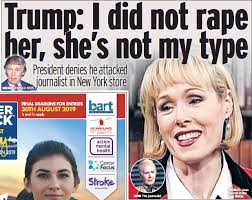