Embattled and heavily criticized Texas Governor Greg Abbott may be running against Trump for the 2024 Republican Nomination for President. His handling of COVID, Texas energy system, and other issues have been horrendous. Now, he is trying to bailout his campaign donors.

He is trying to take credit for FEDERAL bailout money.  Abbott announced that the Texas Health and Human Services Commission (HHSC) will send $128 million in Biden’s American Rescue Plan Act to rural hospitals and nursing facilities. Abbott was against the Act.

Abbott is a hypocrite. 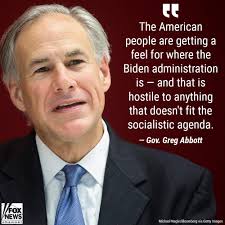 Incredible. Does anyone take this guy seriously?

He also sued the U.S. over its military-wide COVID vaccine mandate. He argued the requirement should not apply to members of the Texas National Guard. A federal judge already dismissed as frivolous a similar lawsuit filed by the Oklahoma governor because National Guard troops are already subject to nine other required immunizations.